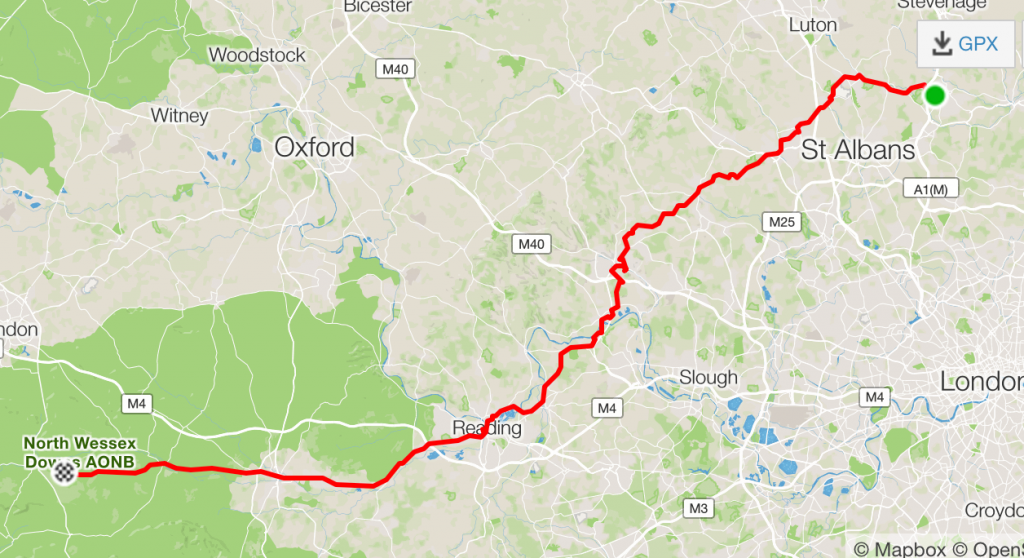 For some strange reason I remember turning the light off by my bed at exactly 03:47 and, surprisingly, I was then wide awake again at 07.37. I briefly considered chasing more sleep but, no, there was an adventure to be completed, so better get to it.

Over the previous couple of days I lost a huge amount of time to navigational difficulties and riding slow cycle paths. It was clear that if I returned home down my previously planned route that it’d likely be Sunday before I got home, as this also followed many back roads and tracks. A revised route was essential and creating this was my next priority.

My clothing was getting a much needed wash and my lights, power bank, and phone were all put on charge. The Anker power bank I’d brought with me had really served it’s purpose by letting me ride at night with my Wahoo Elemnt continuously backlit (vital for map reading and second guessing some poor cuesheet directions) and particularly with all the power hungry supplementary iPhone navigation usage.

This new route planning, however, was not going well. RideWithGps either wanted to route me down major A roads and motorways or down cycle ways, tracks and back roads. I wanted primarily B roads with some lesser A roads as required.

After quite some while I gave up on RideWithGps and switched to Mapometer instead. Mapometer has a checkbox option for cycle routing offering “keep to roads”. Sadly, ticking this checkbox did not actually to do anything. Dragging tracks to re-route down faster roads was not working either. Both apps kept creating maddening minor road diversions or confused double backs…

Time passed, a lot of time, frustrating time. Finally I set a deadline that I would set off again, regardless, by 14:00 and knock around 100 miles off my return journey that day. This would leave me a big ride to finish on Saturday but I still wanted to complete a 180+ mile day to see how I coped.

Thankfully, Martyn’s wife, Sarah, was wonderfully on the case with making sure I ate and drank loads. Between bouts of route planning I had 3 full meals, including scrabbled eggs, roast chicken, sheperds pie and lots of salad and green veggies.

Martyn had kindly adjusted my front disc calliper to stop the pads binding before he headed off to work, which just left me the simple task of lubing my chain and checking my tyre pressures. (I’m running Schwalbe S-One 30c tubeless at 70psi)

Shortly after 14:00 and with my feed bags full of roast chicken pieces and bananas I bid farewell to the home comforts of Martyn and Sarah’s and headed into the busy world of St Albans, Reading and Newbury. Though cool, the sun was shining and a stiff breeze was blowing from the north east; the perfect direction for cycling to Cornwall.

Progress was a little haphazzard as I kept second guessing the route and seeking faster roads. Still, it was surely swifter than the journey up had been though I wasn’t enjoying the generally impatient traffic and hustle and bussle of the city. I looked forward to getting out of town and cranking out some miles.

Amusingly, I managed to end up at the other side of the same road in Temple that had had me doubling back and careening along a river bank on my way up due to a gated community claiming the road as it’s own. Happlily, from this side of the highend housing the escape route was no great drama.

Near the outskirts of Newbury I stopped at a corner shop to stock up for the night. I was just weighing up the risks of padlocking my bike or not when 3 guys armed with guitars and keyboards stopped to admire it. “You don’t want to leave that mate…not around here” “We can keep an eye on it for you, oh and they do great samosas in there…” Result! Another triumph for human kindness. Sadly I briefly considered that these guys might just be setting me up so as to rob my bike…! The workings of my jaded, city weary, mind…

Re-provisioned I joined them outside and got chatting between mouthfuls of the indeed excellent samosas washed down with less excellent Red Bull.

One was a keen cyclist and fascinated by tales of my trip so far and the upcoming TAWR event. It transpired that he’d also suffered the disappointment of riding down the little road in Temple, near Hurley, that ends in a posh gate…

Buoyed by this pleasing encounter I returned, somewhat refreshed, to the road with a vague plan of seeing how far I could get by about midnight. That would give me the chance to re-charge with maybe 5 hours of sleep before dawn and the final push home.

By this point I’d ditched my progammed route and was back to navigating old school style. Town to town and choosing the roads as I went. My pace improved greatly and was helped by the quiet roads night riding offers when you can also readily recognise approaching traffic from the lights ahead. There were still a fair few hills but on these faster roads they were no where near as steep and progress was swift with some exciting high speed descents added in as well.

Midnight arrived and a minor road turning off the A4 duly presented itself. I rode a few hundred metres to get away from from the noise of the traffic and then pushed my bike into the quiet shelter of the woodland alongside.

It was silent and windless but for the sounds of the inhabitants. At least 2 foxes were barking my arrival, then there were pheasants, oh, and what seemed to be an owl impersontating a cuckoo. It was cold though, and I wasted little time clearing my bivi area of bigger twigs and branches before rollinng it out, cleaning my teeth (This feels incredibly cleansing when the rest of you is a damp sweaty mess), messaging home and rapidly falling asleep as the sounds of the forest subsided…another good day.

One more to go, and not just any old day…