I can’t quite believe what I just wrote but, yes, a little over a week ago I actually rode all that and much of it in almost icy drizzle. I must be mad…

Wednesday 22-03-2017 marked the start of my first great test to gauge how capable and prepared I am for the TAWR in early June. My target is to cycle from Falmouth, Cornwall, to friends in Welwyn Garden City and back in 4 days and camping out for all but one night.

Split evenly that equates to about 150miles a day and is the minimum distance I need to cover daily in the TAWR to finish inside of ten days, which is my worst case target.

Day one dawned, cold, overcast and looking showery and sure enough within a few miles I was into cold drizzle even though the forecast was for mostly dry. This adventure was indeed something of a journey into the unknown.

Today’s planning had me meeting up with my cycling coach Martin Burrows for around midday in Tavistock, some 60 miles away. Martin has been setting training drills and monitoring my rides via email and Training Peaks software for the last 6 months but until today we’d never met. Martin is to be my guide and companion up and over Dartmoor and on into Exeter.

I plotted my route for this trip using RideWithGps mapping software which, whilst excellent, does have some limitations. The best way to plan a route is to draw it out dot to dot or road to road but that takes awhile.  RideWithGps simplifies this and allows you to specify start and end points and will then automatically plot a route for you for either walking, driving or cycling.

I planned my route between Falmouth and Welwyn Garden City using the auto, cycling, method…mistake! In this setting RideWithGps likes to route you along cycle tracks and back roads which is quite fun but makes for slow progress and sometimes sends you down impassable tracks or to dead ends.

I had studied the route for such suspicious roads and tracks and made some alterations but without local knowledge it is very hard to get this absolutely right. I wasn’t too worried when I set off as this trip wasn’t about finding the fastest route and after all I’m riding a “gravel” bike so mixed terrain just adds a bit of interest…or so I thought. This really clobbered me badly on day two but was hassle enough today as well. 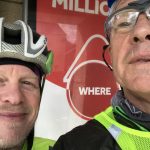 My back road route made for a lot of short but very steep climbs and slow twisty descents down narrow lanes. Good fun on training rides but not so clever for making swift progress and so it was a little after midday and over 6 hours until I met up with a gently shivering Martin in Tavistock. After a quick re-stock of liquids and a warm up coffee we set off over Dartmoor.

Frankly after the many thousands of feet of climbing I’d already done the novelty of 6 Mile Hill wasn’t so attractive but at least at 8% gradient it was long rather than another one of those brutal 10-15% numbers that had been challenging me all morning.

Power wise my meter showed that with me and my laden bike I needed to put out around 300w to climb most hills regardless of whether I sat or stood up. I knew I had a lot more to do today so conserved energy and my legs by steadily winding my 34:36 granny gear setup at a go all day pace. Martin pottered alongside and was considerate enough to stop talking so I could breathe.

He soon came to learn of the “cycle paths” that RideWithGps likes when my route delivered us to a sodden, rocky track that would probably have had to be walked. Martin knew an alternative route so we chose to abandon my planned track for now and pick it up again in Exeter.

It was still very cold but the drizzle had at least given way to broken cloud with scattered showers when we finally parted company in Exeter. I could see that Martin was quite relieved to be heading home to the warm. He left me his last banana and watched my bike while I re-stocked on fluids again in the Coop before shaking hands goodbye whilst I warmed myself in a patch of sunshine as I updated my wife on progress.

This was late afternoon at around the 100mile and mark and with 10,000ft already in the bin.

I mistakenly thought “ah well at least it should be flatter now…” but the windy back roads proved otherwise. At least all the hills were keeping me warm and the descents were never long enough to freeze me. I decided to target Honiton for a dinner stop and I craved fish and chips. I still really wanted to do 300km/180miles today if I could.

However my route soon began delivering me to roads such as this, Doh! It’s going to be a long day. 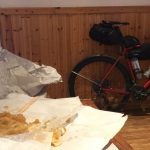 Happily things improved and I made it to Honiton at around 19:30 for my long lusted fish supper which duly presented itself in the wonderfully welcoming form of Chippee on Honiton High St. They very kindly invited me to bring my bike in so that I could keep it safe and eat in the warm….I think I may have looked a bit haggard. Two pieces of cod and a portion of chips later and I was feeling somewhat rejuvenated. Time for the final push of the day…

As you can see above I’m soon back on the wibbly wobbly back roads in the middle of nowhere in the dark but hey this is what I chose so I may as well press on.

Riding became increasingly comical because I could only see as far as the beam from my light through steamy glasses and I really had no idea what was coming next. At one moment it would be a smooth speedy section of tarmac and the next I’d be on a heavily rutted track with wheel sucking mud traps. The only bonus was that as it was dark I could tell early if any cars were approaching which meant I could at least descend a bit faster than in daylight hours. The mizzle returned however…

Around about 10pm the novelty of all this was wearing a little thin particularly as I did finally get duped by a muddy rut and fell off into the verge. A nice soft landing and no harm done, or so I thought. An hour or so later I paused to update my wife and have a snack….er oh…no snacks! It turns out that in the fall the Nakd Bars and pork pie that I had stashed in my food pouches had fallen out into the verge along with my rather fine Nitecore torch!

No food, no food, NO FOOD! The torch was a costly pain but I still had my phone and a second bike light that I could use but no FOOD! Have I said that enough….

Now the hunt was on for a camp spot, I’d done a respectable 250km which was half way and would have to do though it was still sometime until I found somewhere that wasn’t sodden. I checked all manner of promising gates and fields but they were either super water logged or simply quagmires of mud.

I was getting increasingly cold as well but fortunately made it to the outskirts of Yeovil and found a dryish spot on a hill overlooking the warm lights of peoples homes below.

The only problem being that the gate was padlocked and meant that I had to lift my heavily loaded bike over and I worried for my back at little as I did so.

I sent a quick text home to let my wife know I was safe and bedding down and then set about getting my bivi sorted and climbing into it without getting my damp socked feet any wetter than they already were.

It must have looked pretty comical as I fumbled around in the dark and I fretted a little that one of the residents might come looking for the source of the flashing torch on the hill and move me on. Fortunately this never happened.

I considered undressing from my damp clothing but concluded that I’d freeze in the process so just removed my quilted jacket and waterproof to use a as pillow and climbed in as was. Even with my eyes closed, as I drifted off to sleep, I could still see winding roads and tracks and continued to twitch as if I was dodging potholes and rutts…