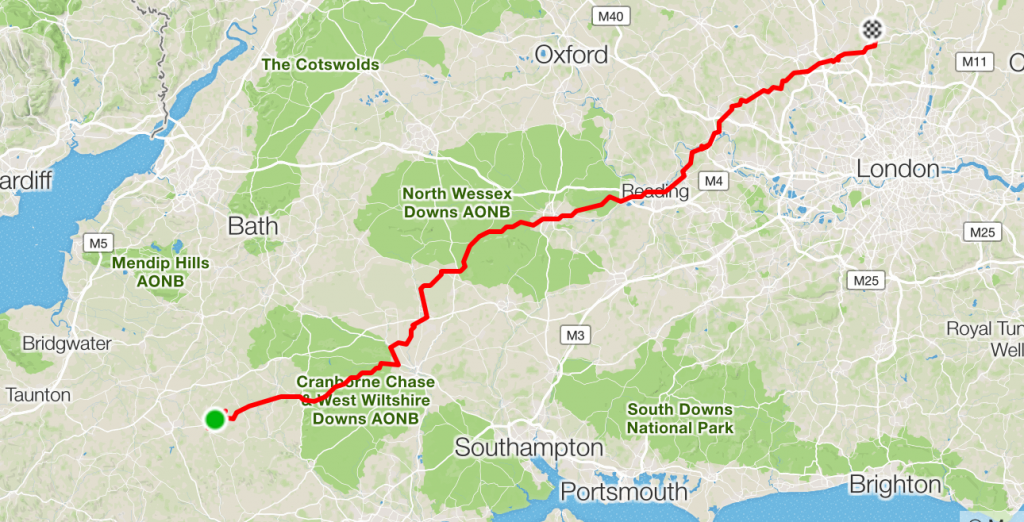 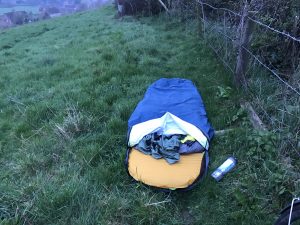 Day 2 dawned and I awoke happily warm and, remarkably, somewhat drier than when I’d wriggled into my little bivi cocoon 5 hours or so earlier.

My weather check the day before had suggested that sunshine and unfavourable northeasterly winds were to be the order of the day. Right now though it was bitterly cold and anything but sunny.

Still, I felt optimistic for an easier day today, the hills of Devon and Cornwall were done and surely I’d be on some better roads as well. Right now the task was to find some food and get back onto my planned route. This sounds easy enough but I managed to make a complete lash up. I found a petrol station soon enough and got some welcome warmth in the form of a coffee and a hot pasty but then promptly set off in the wrong direction back to Sherborne – doh!

At least I was on the fast A30, making progress and warming up rapidly, but oh my, some of our roads are in a state. Where possible I like to keep fairly tight to the kerb to give traffic plenty of space to pass and discourage impatient drivers from making rash overtaking decisions. This is impossible when the metre of road next to the kerb is punctuated with wheel crushing pot holes and sunken drain covers. I’d actually say that being constantly vigilant for, and navigating around, these traps was the most wearing part of this trip overall; that and the cold.

Sherborne hadn’t presented a decent breakfast stop this early in the morning and now it was raining that fine, extra-wet kind of rain that only the UK can seem to conjure. Ho hum, onward..

Still I wasn’t short on rolling hills to keep me warm between the chilly descents. The pasty from earlier continued to remind me for several hours not to eat cheese and onion pasties.

I briefly considered diverting into Shaftesbury for a food hunt but decided instead to press on as there was still a long way to go and I was becoming concerned that unless the rain stopped soon I’d have to change plans and hole up in a B&B somewhere or freeze.

Happily, I eventually rolled into Wilton and the delightful Darling Coffee house. As I messed about propping my bike outside the owner came out and offered me the use of the lockup alongside to keep it safe. Result! It kept getting better as it then turned out that they also make their own fantastic sausages and bacon. I enjoyed a superb breakfast and two great cups of coffee as I warmed through and watched the fine, steady stream of rain outside. If you’re ever in Wilton do check out Darling Coffee, the service and food are superb, and the owner incredibly welcoming to everyone.

The day outside was getting brighter and the rain did appear to be easing. Sitting here wasn’t getting me anywhere so I re-assembled myself into my damp layers of clothing, bid farewell and set off again into the damp.

Progress now was very good, the rain passed, and patchy sunshine began to dry me out; but it was still remarkably hilly. 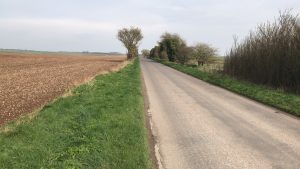 Eventually I arrived at some delightfully flat roads that were, unfortunately, accompanied by ferocious 30mph+ headwinds. At least I got the chance to become more familiar with riding on my TT bars.

I followed another cyclist along here, sometimes gaining, sometimes dropping back but finally met up and had a chat about the wind at the next junction. It turned out that he was turning round and heading back with a tail wind – lucky him.

I was now Newbury-bound and about to experience another batch of dubious cycle trails, and looking at progress so far I reckoned I should be able make Welwyn Garden City by midnight; but I hadn’t anticipated the shenanigans to come.

Newbury was a bit of a shock to the system after all my time on the open road. Lots of people walking around holding angry conversations on hands free phones, boy racers revving their purple and orange cars, and wealthier types showing off the sound of their Astons, Porsches and Ferraris. None of them looked very happy at all however.  They should get a bike I thought, because though this was a tough trip, I was actually thoroughly enjoying myself and felt charged, driven and truly alive.

My route once again had me meandering about slowly on various cycle ways but still it was nice to have a bit of a breather and rest from traffic. It was about 17:00 now and I decided to make the most of daylight and press on until dark and then find a dinner spot. At around 18:00 I made it to The Bladebone in Bucklebury and treated myself to a sit down meal complete with green vegetables. I was missing my greens! I estimated I had around 60 miles or 100km to go so should make it by midnight without much bother. Oh how wrong I was…

Initial progress was great and I knocked close to 20 miles off in around an hour or less but then I was back onto slower cycleways. The first real knock back was when I was directed down a lane at a place called Temple, near Hurley, that actually terminated at a big iron gate with an illuminated keypad. This was clearly there to protect the well-to-do river folk in their fine houses from riffraff such as I. I briefly considered pushing a button or two and seeing if I could blag a passage through their world of splendid isolation, but in my fatigued state I decided that I really couldn’t face the likely knock back from such stuffy types. (Please excuse my prejudice, posh riverside folk…)

A study of the map on my iPhone showed an alternate route along the river bank tow path that would eventually join up with my pre-plotted route. Off I set and, sure enough here was one of the worst tracks to ride in the dark along a river bank. Muddy, rocky, narrow and with low overhanging branches and of course SLOW. I made comical progress but with the highly bumpy ride my back wheel began to feel a bit different and I eventually concluded that my tyre was soft. Oh no! Fixing a flat in a tubeless tyre, in the dark, on a cold muddy river bank was the last thing I needed but as luck would have it the re-inflated tyre held pressure.

It must have been that all the bouncing along had resulted in a kind of tubeless pinch flat where the movement had caused small leaks at the rim. I pumped it up good and firm to hopefully avoid any more of the same happening but all of this meant that I’d only made maybe 5 miles in the last hour. There went my midnight ETA.

Apart from brief stretches progress was painfully slow from then on as I went from good roads to tracks. I adjusted the display on my Wahoo Elemnt to show “Distance Remaining” and at 23:19 when I texted my friend Martyn at the other end it reckoned on 49km to go.

I was tired but not as in about to fall asleep, or my legs refusing to move, I just wanted to stop for the day. My Wahoo Elemnt wasn’t helping much either, this new distance remaining display was a torment because it would count down the distance but then suddenly add some more back on again….enough, enough!

Another piece of comedy came in the form of a pickup truck driving past in the opposite direction and hitting a puddle so perfectly that my now dry self got soaked with what felt like a pint of water landing perfectly in my crotch! I had to laugh, but things were getting tender down there from all this damp time in the saddle and this fresh watery assault was the last thing I needed.

Eventually at around 2:30am, after well over 18hrs on the road, I rolled up to the welcome warmth of my very understanding friends’ house. I’d woken him prematurely with a phone call maybe 45mins earlier, when I thought I was closer than I was due to the poor intel coming from my bike computer. Sorry Martyn.

I blearily recounted some of my tales over a large helping of homemade shepherds pie chased down with a huge mug of tea.

Tomorrow was going require a rethink, I just couldn’t return home in a similarly haphazard manner and with so many hills. I would plot a new route in the morning but now it was time for a wonderful hot shower and away to bed. Once more roads flew by in my mind eye and I twitched gently to sleep.

I’d made it half way!