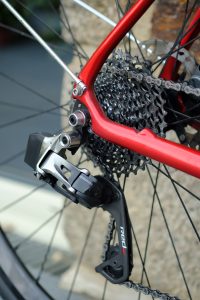 Riding in the Transatlantic Way Race highlighted one particular issue with my bike that could be improved; gear shifting. I bought it as a stock 2016 Genesis Datum 10 equipped with Shimano Tiagra 10 speed gearing. This mostly worked well but I had occasional issues with the left shifter intermittently refusing to engage and change from small to large chainring. It would begin working again after much random flicking of the lever but the reason for this problem never became apparent . This was not confidence inspiring at all and as the inner workings of the shifters aren’t readily serviceable I wanted to change this set up to something more reliable.

In my earlier post about the upgrades I’ve already made to this bike you’ll see that I opted for old fashioned bar end shifters and I’ve been riding very happily with these up until the race. I chose them because:

So all good then! Well, almost… During the race proper I was riding well over 15 hours daily, day after day, in highly undulating terrain and that makes for a  huge number of gear changes. Consider that I rode 242km last Sunday in similar terrain and made 1,537 gear changes (81 front and 1456 rear: data thanks to eTap and Wahoo Elemnt ) it is easy to see how these endurance events change so much of what we may be used to on a bike.

Using this rate against my average 322km a day on the TAWR suggests around 2000+ gear changes a day. It is hardly surprising that by day six I was getting a sore right hand and a blister on my little finger. What is the easiest way to make 2000+ gear changes daily over multiple days? Push button electronic shifting of course.

A second, and much bigger issue, became apparent one night when I was slowly climbing a narrow, windy, undulating pass. I couldn’t see beyond the limit of the beam from my light and this made it very hard to see the gradient ahead and anticipate my gear changes correctly. Added to that, not being able to shift from the hoods or brake levers made things even more difficult. This was true on some daytime climbs as well so I resolved to look into electronic alternatives once the race was done as I find that for ultra cycling anything I can do to make life on the bike easier helps. What might be just a minor niggle or annoyance on a weekend century ride can become a real problem over long multiple day rides.

My first thought was Shimano Di2 as it’s a well proven system chosen by many top ultra cyclists. Di2 however involves a lot of wires, connections and a single central power source. None of which should be a problem when regularly well maintained but contacts, wires and connections can very quickly wear or corrode unseen during extreme conditions.

I love the purity, style and history of Campagnolo as a brand and really wanted to delight in their offerings but I just couldn’t. I quickly eliminated their EPS system because it seemed far less likely that it could be safely made handle the large 36T rear sprocket option that I want to be able to run as well issues with battery placement and ease of charging whilst on the road etc.

To my mind, when compared with Sram’s eTap wireless system, Di2 and EPS seem needlessly complex and dated. I’m convinced that all manufacturers systems will become wireless over the next few years. 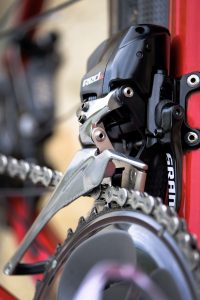 Sram’s eTap system requires 4 batteries (2 rechargeable in the changers and two CR2032 penny batteries in the shifters) which may initially seem complex but as it is highly unlikely that all 4 batteries will fail at once I see this as an advantage. The batteries are light, the charger is tiny and can be powered from a USB power bank or dynamo hub. There is no junction box, no cabling, no remote battery to be hidden, just a very tidy self contained system.

Added to that the eTap shifting system really appeals to me. Press the left lever and the chain climbs up a sprocket, press the right lever and the chain drops down a sprocket. Press and hold left or right lever and the gear change continues up or down as far as you want. Press and hold both together to shift the front chainrings up or down. It’s superbly simple and intuitive, and leaves the brake levers left solely for braking. I instantly settled into using the system and virtually never miss shift whereas with STI shifters I’d get it wrong surprisingly frequently (I know blame me not the system…but..). A further advantage of electronic shifting is being able to set up satellite shifters to change gears at the push of a button from on the aero bars or the drops etc. I have Sram eTap Clics neatly installed in the bar ends and I find this really let’s me “settle in” better on the rolling roads I tend to ride. The brakes have sockets that allow for up to two satellite shifter systems to be added so for the ultimate in flexibility you could have Clics in the TT/aero bar ends and Blips on the drops or bar tops.

Apart from the obvious high cost the only downside is having to charge/change batteries to keep everything working and this is what put me off going electronic initially. eTap batteries are small and light so carrying charged spares plus the tiny usb charger that can run from a power pack or from my hub dynamo is no big issue. A full system failure is extremely unlikely and at worst I might be stuck with either using a single front chainring with a  working rear derailleur or with shortening chain and cobbling together a single speed set up which maybe no worse than a failure with a mechanical system. The long term reviews I’ve read suggest excellent reliability so I hope it never comes to that!

There is definitely a tactile delight to full mechanical systems but I don’t think they are the optimum choice for ultra endurance racing because with ultra distances anything that makes time on the bike easier and more comfortable is an advantage. Of course, having said that, it maybe that if you are heading somewhere truly remote that a fully serviceable mechanical system maybe a safer/wiser option.

I’ve found that the slick ease of eTap makes everything I’ve used previously seem like an antique and as the vast majority of my riding distance is in the UK with fairly ready access to spares etc. I’m very happy to enjoy this luxury. 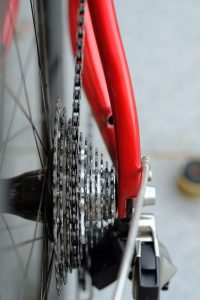 I’ve been running a Sram PG1170 11-36 cassette with a Shimano Ultegra medium cage rear derailleur up until now and with no issues. Web searching showed that many people had run 11-36t cassettes with the Sram Wifli eTap system even though Sram advise on a 32t maximum and, happily, I’ve had no issues either with my 11-36t or my Ultegra chainrings for that matter.

I’m pursuing optimum with this bike and to that end I have modified my cassette by mixing the sprockets from my existing 11-36t with those from an 11-25t PG1170 cassette that I found heavily discounted online. The standard PG1170 11-36t and 11-25t gear spacings run as follows:

The three largest 28,32,36 or 21,23,25 sprockets are joined together and cannot be split but the other individual sprockets can be swapped about so long as you start with the 11t so I’ve combined the two to create an alternate 11-36t cassette as follows:

This gives a more even gear spread through the middle of the cassette (as illustrated below) which makes for more economical riding with fewer changes in cadence. That’s the theory at least and it’s working very well around my hilly Cornish terrain and on recent rides my most used gears have been the new 50 x 21 & 50 x 23 ratios.

It’s now pretty much the perfect bike for my needs. 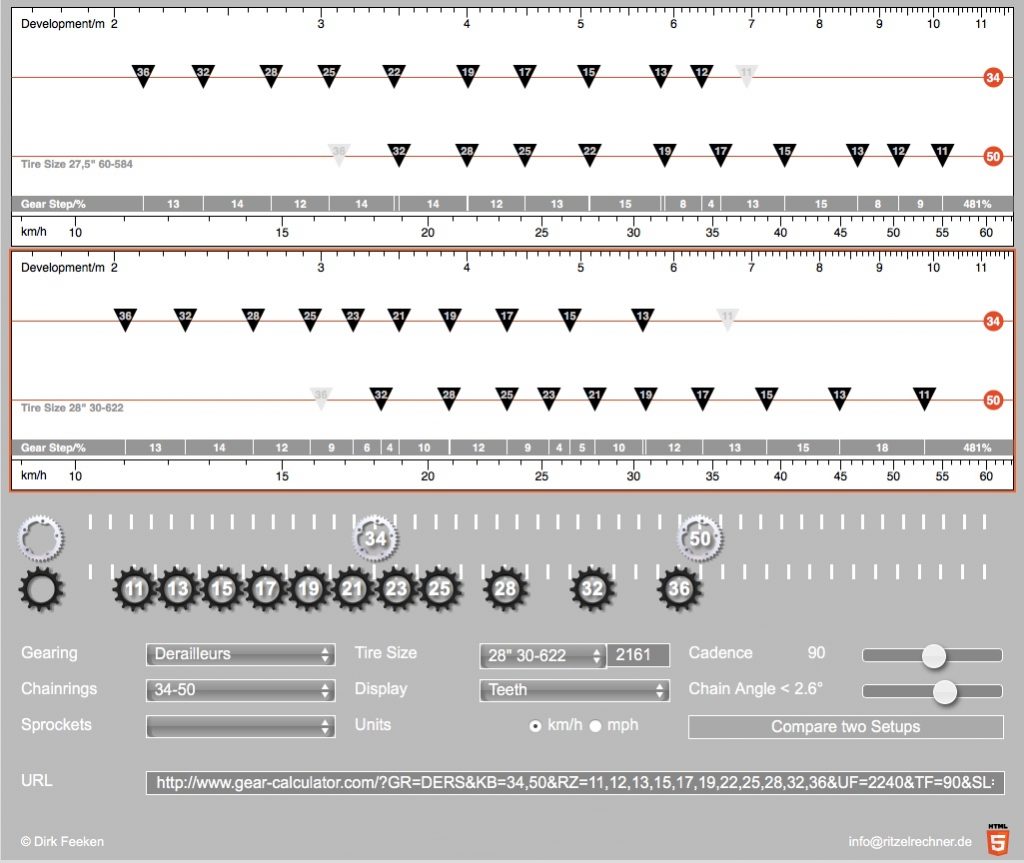 Marvin enjoying the view... he doesn’t have to p