What am I riding for this adventure? 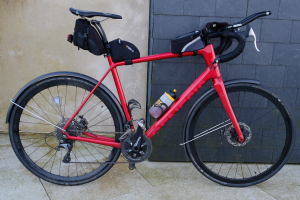 A Genesis Datum 2016 “10” edition. The version with the lowest equipment specification (There’s 10, 20 & 30, all with the same frame but different drivetrain and paint jobs). I rode this pretty much in it’s stock Shimano Tiagra setup from September till January other than changing the tyres after a few weeks and installing a Quarq Dfour power meter to aid training.

During those months I researched a lot on endurance cycling in general plus rider accounts from other ultra distance events and generally finessed my ideas into what I felt was going to be my optimum setup. It won’t be everyone’s idea of ideal by any stretch but I’m very happy so far and will be really putting it through it’s paces on some longer rides in the coming weeks.

what have i changed?

Well, I grew up riding bikes with friction shift gear changing and really like having a single lever for changing gears up or down over whatever number of gears I desire. The Tiagra brake lever controlled gears were mostly fine but on occasions the left side one, controlling the front mech, would get stuck on the small ring for no apparent reason until eventually, after much lever flicking, it would re-engage. Not confidence inspiring. 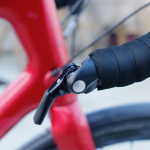 I’ve also had issues with finger numbness on longer rides and bar end shifters force you to move your hands around the bars more which helps with blood flow and reducing nerve pressure. I cut 25mm off the handlebar ends before fitting the shifters so that they didn’t stick out to far and get in the way when riding out of the saddle. I also double wrapped the bars for more comfort using the original wrap with Sram cork tape on top. I am very happy with the result and adjusted to using them immediately. Perfect for long rides with little to malfunction.

They’ll also control pretty much any brand of replacement front/rear mech if needed due to mechanical troubles mid race. I can also micro adjust the front mech to stop chain rub dead easily. Again makes me move my hands! The Dura Ace front mech maybe a little excessive but it does have a super smooth action. 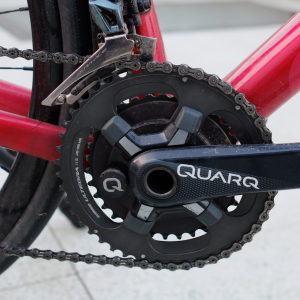 The smaller 46T big ring means I spend most of my time using just that and only drop to the 34T on the steepest hills. When it was 50t I very rarely used the smaller sprockets. (UPDATE: I’ve changed back to a 50:34 setup because shifting works better and I’ve gotten stronger)

There’s a great piece on ratios for ultra cycling here that informed some of my decision. My low 34-36T grandad gear makes the steepest of Cornish (And hopeful Irish) hills very doable even when exhausted. Energy conservation and management will play a big factor in this race and some easy gearing is going to help.

Saddles will be the topic of a whole other post but having tried a few I can say I’m now very happy with the Ergon SR3. Combine this with Ergon’s CF3 Setback seat post and comfort levels increase dramatically. (UPDATE: Following my 4 day Welwyn Garden Trip I switched to and ISM PN1.1 due to penile numbness issues!)

The Ergon CF3 is described as: 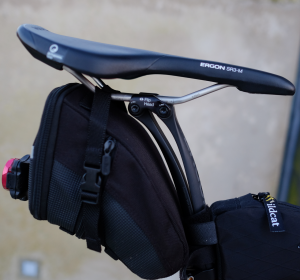 It really does achieve all of that. The only downside, aside from cost, is that altering saddle angle is a longwinded process once it’s installed as the post has to be removed for angle adjustments  It’s best get everything spot on and measured with your existing setup and then transfer that across whilst also making allowances for how the saddle moves aft and levels out with your weight on it.

The stock Fulcrum Racing DB wheels that come with the bike can only be described as basic. After only 2000km or so the rear freehub began to bind and grind even with regular oiling. These are budget wheels and removing or servicing the hub is a real faff compared to fulcrum’s higher end wheels and I suspect it’s not really intended. Either way for endurance riding on multiple road surfaces with pot holes and who knows what good wheels are essential. I wanted wheels with a good strength to weight ratio that would also endure and be fully serviceable. The wheels Pete Owen has built me should see me through many years of hard use. Pete clearly loves his craft and is a pleasure to deal with. I found out about his wheels whilst idly fantasising about a custom Rusby bike, not this year!

The top quality Chris King rear hub should last indefinitely, with regular servicing, and can be reused with new rims in the future as needed. Likewise the SON dynamo hub is widely regarded as the most reliable disc hub available and should be good for 10’s of thousands of km.

Finally the tyre upgrade came about after I found myself unexpectedly sliding down the road on my side without warning. I can’t really blame the stock Challenge Strada Bianca 33c tyres but as I wanted to go down a size and try tubeless it was a good excuse for a change. Such crashes aren’t good for one’s confidence either, especially as at no point did I think “oops I’m taking this bend a bit quick”, I just ended up on the ground unexpectedly. By changing tyres I felt I was at least doing something to reduce the chance of similar events in the future.

I settled on Schwalbe S-One tyres because they have a very low rolling resistance, excellent reviews for grip, and as 30c’s in 60-70psi tubeless mode comfort is a very high indeed. I converted the stock Fulcrum clincher wheels to tubeless using Stan’s RimTape which was very easy. Fortunately I have ready access to reasonable sized compressor which makes inflating the tyres onto the rims pretty easy. I don’t think I could have got there with just a track pump, a much bigger initial blast of air is needed to get the tyre to inflate into place. No punctures so far but I have a Dynaplug® Micro Pro Bicycle Bike Tubeless Tyre Puncture Repair Kit in case. (UPDATE: I’ve had a rear tyre puncture that self sealed once pressure dropped to around 40psi but it would not hold at 70psi) I had to top up the tyre pressure a couple of times in the first 2-3 weeks. Apparently all tyres are just a little porous and it takes a while for the Stan’s NoTube sealant or similar to fully seal them. Switching them over to the new wheels was no big deal and I barely lose any pressure now.

That about sums it up. I haven’t totalled the costs but I know I could have spent a lot more, or a lot less, but I’m happy that the bike fits my needs perfectly and most importantly won’t limit my performance in any way.